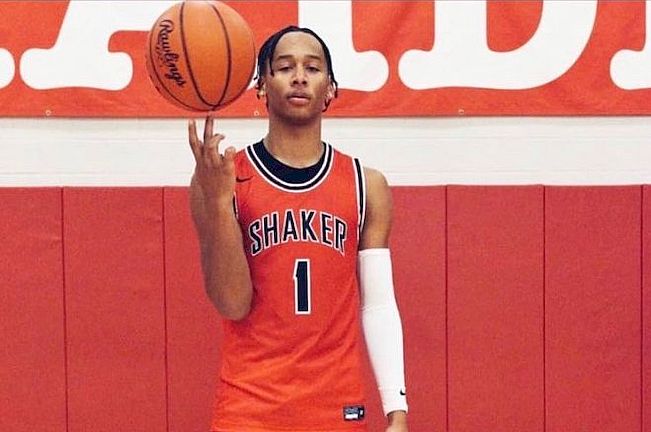 Shammah Scott has seen his game ascend to new heights throughout his basketball career, especially the last two years playing at Shaker Heights High School. This past season, he helped lead a group of five seniors to a regional final appearance before the coronavirus pandemic halted postseason play.

At that moment, it was time to shift focus from trying to win a state championship to deciding his future playing career. The process of figuring out the next step was arduous, as each passing day never felt the same.

After a myriad of talks with family and some of his closest friends he’s played AAU basketball with growing up, Scott finally had an answer. On May 20, he announced that he’ll spend next season playing for the International Sports Academy in Willoughby.

“I was talking to my family about it and Meechie Johnson,” he said.

“[Meechie] kept telling me all the good things about playing there and in the end, I trusted him and trusted my gut and that’s when I made the decision to go there.”

The recruitment process heated up during the second half of the season. College coaches from the Division II and III levels started calling him several times per week as a result.

But after long conversations with current and former friends playing for the academy, the choice for ISA felt right for Scott. He explained this opportunity gives him one more year to get where he needs to be mentally and physically in order to transcend his play to the next level.

The 6-foot-2 guard took on a greater role for the Red Raiders his senior season, resulting in one of the most accomplished seasons the team has had in recent memory. He averaged 14.4 points, 3.5 rebounds and 2.1 steals per game and became one of Northeast Ohio’s premier guards, having the keen ability to get to the rim often.

After transferring from Villa Angela-St. Joseph following his sophomore year, Scott found home and success at Shaker Heights. A special bond with his teammates made this past season one to remember on and off the court.

“I feel like my senior season at Shaker was one of my best years of basketball because our whole team was very close, even off the court as well,” Scott said. “The chemistry showed up as well and that’s why we were able to win a lot of close games.

There have been a slew of coaches, trainers and players who have stuck by his side through the last four years. Shaker head coach Danny Young was able to witness the growth of Scott since he first stepped foot at the school and how he grew as a player didn’t go unnoticed.

“How committed he was to training and working out on his own in addition to the coaching staff’s requirements,” Young explained. “His ability to score the ball at all three levels and his athleticism improved both years. He also committed to improving his body and has a strong frame.”

The plan for Scott is to play one year at ISA before committing to play college basketball for a program that accepts him, fits his playing style. He doesn’t worry about playing for the ACC, Big Ten or even the SEC, all Scott thinks about is playing for a team that provides an opportunity to learn and grow as a basketball player.

“I want to end up playing Division I basketball, but in terms of high-end, that doesn’t matter to me,” Scott said. “I just want to go to a school for the right fit and what’s best for me. It doesn’t matter if it’s high, mid-major or low-major.”