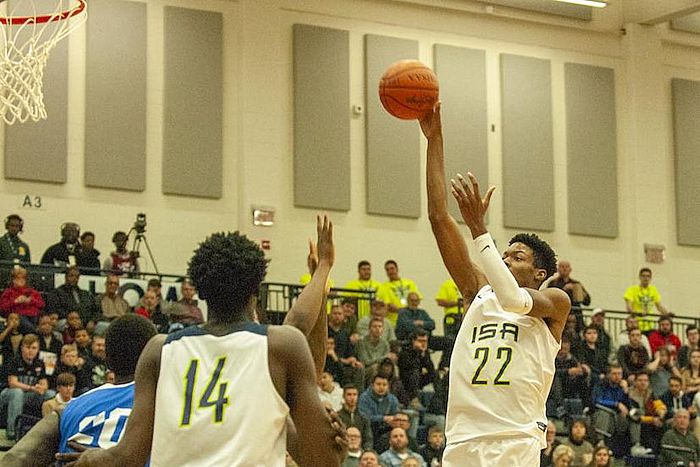 KETTERING — Keon Ambrose and his ISA Andrews Osborne teammates didn’t like the memory of last year’s trip from Northeast Ohio to Flyin’ To The Hoop. The Phoenix were reduced to ashes in a 95-64 loss to Bella Vista Prep of Arizona.

In Friday night’s opener at the 18th annual Flyin’ event, the Phoenix announced that they have risen from those ashes. The opponent was another Arizona team, Hillcrest Prep. The Bruins brought 4-star seniors Puff Johnson (North Carolina) and Dalen Terry (Arizona) and two 5-star juniors. But ISA, which stands for International Sports Academy, brought great effort and controlled most of game for an 81-68 victory at Trent Arena.

“We wanted to make a big impact and we’re here to win and we take it very serious,” said Ambrose, who has signed to play at Alabama. “We want to make sure that teams know who we are and know our names so that in the future we’ll be a powerhouse team.”

Head coach Dave Briski previously coached at Spire Academy, another Northeast Ohio program whose post-grad team will be at Flyin’ on Monday. He’s eager for his new team to respected as an elite team, and Friday’s win was an important step in that quest.

“It says we’re here to stay and we’re here to stay for a long time,” he said. “We want to build this thing to be one of those teams year in and year out just because of the name on the front of the jersey you know is going to be a top 25 program. And you know what the type of kids are that are in those jerseys, which are high character, good academic kids who want to work hard and play some good basketball.”

Ambrose, a 6-foot-8 forward from Canada, made his case for the all-tournament team with 18 points and 20 rebounds. His dominant first half of 13 points and 16 rebounds led the Phoenix to a 40-29 lead.

“He got off to a rocky start this year, but that kid has figured it out and is playing basketball at an unbelievable level,” said ISA coach Dave Briski. “Alabama’s getting one hell of a player.”

Hillcrest rallied to tie at 48 late in the third quarter, but ISA responded with a 15-2 run led by sophomore point guard Jaden Clayton, who scored 15 points on three-of-four 3-point shooting and had six assists.

“He controlled the game tonight, and when your point guard is the best guard on the floor it really helps,” Briski said.

An emerging player on this emerging team is 6-11 center Charles Bediako from Canada. He’s drawing interest from mid-major teams like Ohio and St. Bonaventure. He had 14 points and eight rebounds.

“When he came to us last year a lot of high-major coaches saw him in the fall,” Briski said. “Basically they all said the same thing. It’s nice because he’s 6-11, looks really athletic and he can run and jump. but he doesn’t do anything. He’s put in a lot of hours, he’s got a really good basketball IQ, he’s a really smart kid. He’s going to be playing this game a long time because of what is above the shoulders, but he’s got great touch around the rim and the jump shot’s coming along.”

ISA’s big three of Ambrose, Clayton and Bediako have led the Phoenix to a 15-8 record and 6-1 mark in January. Briski said his team is playing its best basketball right now.

“We played harder than I think I’ve ever seen us play,” he said. “We played with poise in front of a crowd, executed a game plan. We finally played with a level of confidence that we should be playing with. And on top of that we executed.”