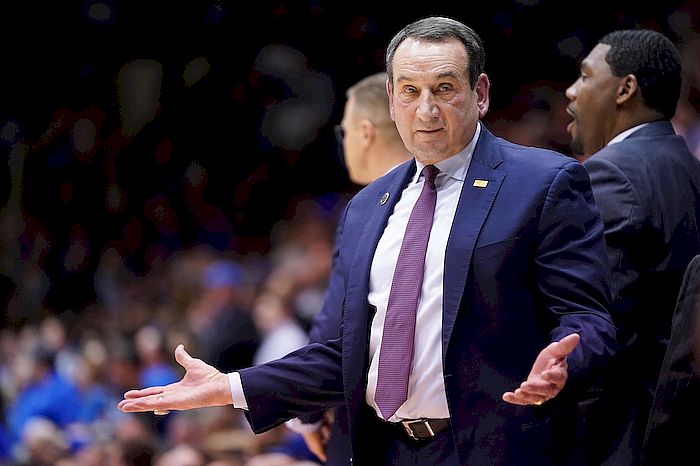 Posted at 12:00h in News by adminisa
0 Likes
Share

A six-deep 2020 Duke basketball class seems one post presence short of completion, and one high school junior could become that final addition.

The only uncommitted 2020 prospect holding a Duke basketball offer, four-star center Hunter Dickinson, won’t likely end up in Durham. No, most insiders see the 7-foot-2, 260-pound lefty choosing Michigan within the coming weeks.

Now, Mike Krzyzewski and his assistants might be OK tying the bow on their 2020 class as is. They might see the combination of Brakefield, Coleman, and current walk-on freshman forward Keenan Worthington providing ample bodies for practice and backup needs.

However, International Sports Academy (Ohio) junior center Charles Bediako, a reclass candidate, could turn out to be the answer to the Blue Devils’ remaining 2020-21 concerns in the paint. Duke assistants Jon Scheyer, Nate James, and Chris Carrawell drove all of 30 miles on Saturday in order to check out the four-star 17-year-old — who turns 18 in March — at the Phenom National Showcase in Raleigh.

Bediako, No. 40 overall on the 247Sports 2021 Composite, has not yet received a Duke offer, but Krzyzewski’s gang has now seen the 6-foot-11, 220-pound Canadian in action on several occasions (he scored 21 points in a loss this time around). So one could deduce the Blue Devils are waiting to see what happens with Dickinson and then Bediako’s reclass decision before handing out an offer.

So what are Bediako’s thoughts on a reclass? And what are those close to him saying about his game’s trajectory?…

According to his talk (below) with Phenom Hoops Report on Friday, Charles Bediako is not ruling out a reclass. At the same time, he appears in no hurry to make up his mind. Rather, he’s taking a wait-and-see approach to such an important decision.

“As of right now, a couple of schools came in, Michigan State, Ohio State, Duke, Texas,” Bediako said. “But as of right now, some schools have been asking me if I am going to reclass to 2020 or stay in 2021, and I just simply tell them I kind of want to wait until after the season.

“And depending on how the season goes, I should probably know my answer from there.”

In response to a followup question to clarify if there is the potential he will reclass to 2020, Bediako simply replied, “Yes.”

As for what the Blue Devils could expect should they extend an offer and then land Bediako for next season — he only holds about 10 offers to date and has not taken any official visits — his current basketball teacher spoke with Cleveland.com in October and broke down his star pupil’s aptitude, attitude, and recent rise (he’s shot up 50 spots since June on the 247Sports 2021 Composite).

“He’s a special talent because Charles learns quickly and gets better every day,” ISA coach Dave Briski explained. “And that’s really, really hard to do. It’s hard to give a player a teaching point and then for them to immediately put it into practice. And he’s able to do that.”

“And then you fast forward to this fall and you have the whole country basically drooling over the kid. Basically, everybody has been in at this point…They’re recruiting him hard. They’re sending head coaches, which is pretty cool. So he’s in for a fun ride…His trajectory is scary.”

At the moment, Bediako is primarily a rim-protector on defense and a back-to-the-basket force on offense who has relatively impressive speed in the open court for his size. But as the big man noted, he’s been working on his range, face-up moves, and guard skills from the wing.

“Every college coach that has come in here [has said] that he will be an NBA player,” Bediako’s teammate, Meechie Johnson, pointed out in the above video. “And that’s not just me saying that. I’m talking about Duke, Florida…a lot of schools have been in here, and they see the potential in him.

“He can block shots, he runs the floor, he has a crazy motor. He controls his own destiny.”

At the very least, Bediako looks like a potential longterm project who could help make Mark Williams better in practice next season while hopefully being able to fill in whenever Williams needs a breather or faces foul trouble — or be ready in case, God forbid, Williams suffers an injury. At best, he could compete with Williams from Day One for the starting gig down low.

As Bediako said, though, don’t expect a decision until spring regarding both the reclass and which college he will attend (but it wouldn’t be a surprise if a Duke basketball offer came his way by the end of November).