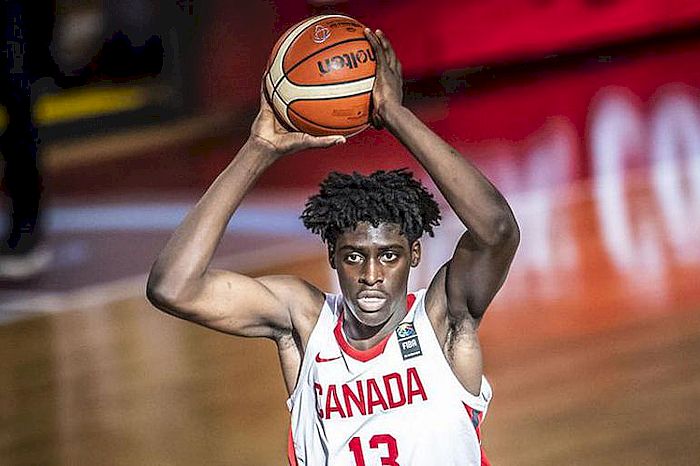 CRETE, Greece – The FIBA u19 World Cup is full of players that have already established their reputations  in high school basketball or in the professional ranks, but there’s been plenty of opportunity for new prospects to emerge.

One player that has taken advantage of the stage is 2021 center prospect Charles Bediako. After a combined eight points in the first two games of the event, Bediako broke out for Canada, going for 19 points and 12 rebounds against Latvia and 10 points and six rebounds against Senegal.

Bediako has impressive physical attributes with good size for the position (6-foot-11), length and athleticism. He runs the floor, was active on the glass and showed potential on the offensive end of the floor.

“Just rebounding, running the floor, getting the easy buckets inside, and also just being a shot changer,” Bediako said when asked about his strengths.

Through four games, Bediako is currently averaging 9.3 points and six rebounds a game for Canada, which is set to play France in the Quarterfinals on Friday.

Bediako told 247Sports that he’s already picked up scholarship offers from Illinois, Rutgers and Detroit-Mercy, plus has reeled in interest from others.

“Out of all of them, Ohio State and Illinois are recruiting me pretty heavy,” Bediako said when asked who is prioritizing him.

“Dayton, the coaching staff is friendly,” he said. “Seeing their gym, it was nice and their recovery room. “It’s an awesome campus.”

Maryland head coach Mark Turgeon was among the college coaches that watched Bediako this past week at the FIBA u19 World Cup.